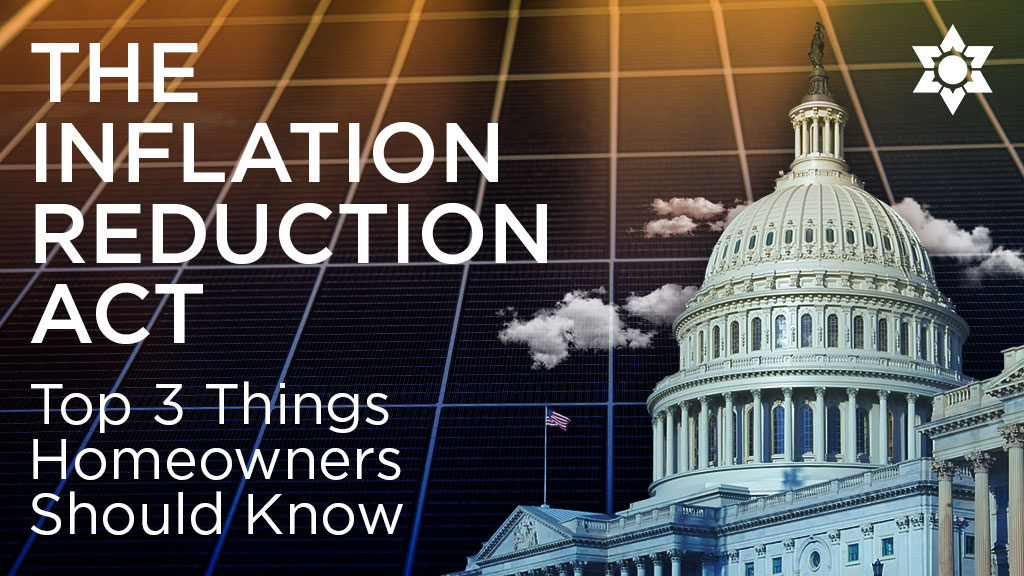 On Tuesday August 16th, President Biden signed the Inflation Reduction Act of 2022 (IRA) into law, making its mark as the single largest clean energy investment in United States history. As part of this sweeping legislation, the federal government will devote approximately $386 billion dollars to combat climate change and boost U.S. energy production across our entire economy to cut carbon emissions, transition towards renewable energy, and set the stage for the nation to become a leader in energy independence. The new law creates a pathway for the U.S. to cut carbon emissions by 40% below 2005 levels by 2030, along with touting tens of billions of dollars being devoted to clean electricity tax credits, individual clean energy incentives, clean manufacturing tax credits, and bolster the American solar industry with investments in production and its growing consumer market.

While these benefits and commitments sound captivating in the headlines and on paper, what does it all really mean for homeowners wanting to go solar and those who already have it? Before the IRA takes effect later this year, it is crucial to understand how to take advantage of the resources provided by the federal government to help you save thousands and lock-in your energy rates for the next 10 years.

Here is a breakdown of what the IRA provides for homeowners in our nation’s reviving solar landscape:

1. Homeowners with solar are eligible for the Investment Tax Credit

As solar energy is quickly gaining popularity throughout the U.S., Arizona homeowners are able to save more on their utility bills without relying on the electrical grid, and even boost existing tax credits by installing solar panel systems on their roofs. With a combined $9 billion in consumer energy rebate programs, along with $1 billion in grants, the law provides a wide range of incentives to relieve the rising costs of energy.

For homeowners interested in going solar, or have a solar project scheduled or completed in 2022, you are eligible for the Investment Tax Credit (ITC) that is being extended and raised to 30%. The ITC not only restores an overly declining benefit that was set to expire between 2022 and 2025, the credit will also remain at 30% until 2032, then decrease to 26% in 2033, 22% in 2034 and ultimately expiring in 2035. Along with helping homeowners cover the costs of installing new solar panel systems on their roofs, you may claim the personal tax credit if you already have a system installed for your home.

2. Anyone can install a standalone battery backup system and claim the ITC

Previously, homeowners were required to install a battery backup system within 1 year of their solar system installation to claim the ITC. Despite current law, the IRA has now separated battery storage technology from solar, making it available for any homeowner to install and claim the 30% personal tax credit. The standalone battery system must have a capacity of at least 3 kilowatt hours (kWh).

If your battery system was installed before the IRA took effect, and has less than 3 kWh of capacity, you have the option of upgrading to reach the storage requirements needed to qualify for the ITC. By making standalone battery systems their own entity, this gives homeowners the flexibility to easily pair with solar installations and other renewable energy systems.

With $60 billion being designated across the full supply chain, the Inflation Reduction Act will encourage a wider adoption of electric vehicles (EV) and clean energy transportation technologies. In fact, the IRA will include up to $80 billion in rebates for EV owners across the U.S., with $2 billion in grants to modernize existing auto manufacturing companies to produce clean vehicles and create jobs that stay in the communities that need them most.

These rebates include a $7,500 tax credit for new electric vehicle owners that would be applied at the point of sale. This also applies to vehicles whose manufacturers are no longer eligible for the existing EV tax credits, such as General Motors and Tesla. If you are thinking about buying a used EV, there will also be a new $4,000 tax credit to be applied towards your purchase. Thankfully, tens of millions of people in the U.S. are eligible for the Clean Energy Vehicle Credits, particularly for couples who make less than $300,000 and individuals who make less than $150,000 annually.

With the rewards of the Inflation Reduction Act of 2022 vastly outweighing the risks, it will help the United States skyrocket back into the spotlight as a global authority in renewable energy. Through providing favorable tax credits to manufacturers, commercial and residential solar power, and investing in communities aiming to find their identities in the renewable energy transition, they make up the backbone of the bill’s priorities and help bolster and American economy that is returning to dominance. As a measure that is supported by many environmental and climate activists, the benefits that come with this legislation may be too good to pass up – reshaping the U.S. energy sector, reversing climate change and preparing for the future of energy consumption and management through advancements in solar technology.

Check out our extended version of this story here.

Get Real Numbers from a Real Person

Thank you for your submission. Our team will be in touch with you shortly.

Thank you for your interest to partner with us. As a next step, we are redirecting you to our portal for completing the registration process.

Confirmed
Back To Home

By booking this appointment, you agree to Solar Topps Terms and Conditions.

This website uses cookies to improve your experience while you navigate through the website. Out of these, the cookies that are categorized as necessary are stored on your browser as they are essential for the working of basic functionalities of the website. We also use third-party cookies that help us analyze and understand how you use this website. These cookies will be stored in your browser only with your consent. You also have the option to opt-out of these cookies. But opting out of some of these cookies may affect your browsing experience.
Necessary Always Enabled
Necessary cookies are absolutely essential for the website to function properly. These cookies ensure basic functionalities and security features of the website, anonymously.
Functional
Functional cookies help to perform certain functionalities like sharing the content of the website on social media platforms, collect feedbacks, and other third-party features.
Performance
Performance cookies are used to understand and analyze the key performance indexes of the website which helps in delivering a better user experience for the visitors.
Analytics
Analytical cookies are used to understand how visitors interact with the website. These cookies help provide information on metrics the number of visitors, bounce rate, traffic source, etc.
Advertisement
Advertisement cookies are used to provide visitors with relevant ads and marketing campaigns. These cookies track visitors across websites and collect information to provide customized ads.
Others
Other uncategorized cookies are those that are being analyzed and have not been classified into a category as yet.
SAVE & ACCEPT