Which Solar Inverter is Right For You? 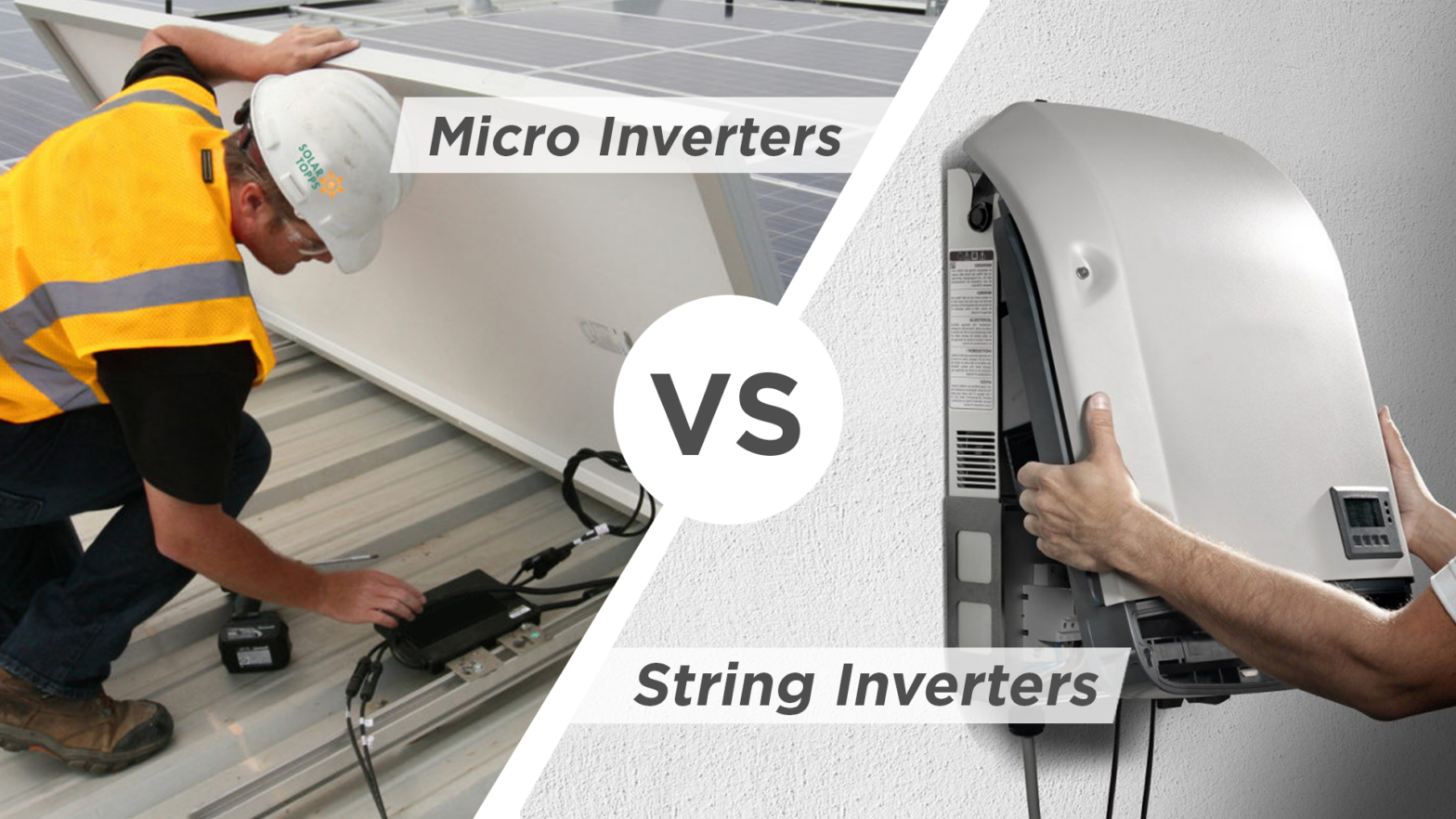 An inverter takes the direct current (DC) of electricity generated when the sunlight is absorbed into the solar panel and converts it into an alternating current (AC) to be used by your home. Let’s discuss three main types of power inverters you can have installed on your home: string inverters, power optimizers, and microinverters.

All three fundamentally serve the same purpose. However, they go about power inversion differently. So, which one is the best for your home?  We discuss the pros and cons of each so that you can make the best choice when going solar.

A string (or inline) inverter system works by connecting all of the solar panels on your roof by cables (or “strings”) and sends the DC electricity into a central inverter(s) installed on the side of your home where it is converted into AC power. Picture it as if DC electricity on a string inverter is a series of rivers. Eventually, those currents will come together and converge into the ocean or in this case, the inverter.

Power optimizers are installed on each panel and are designed to “condition” the DC electricity as it is delivered into a central inverter(s).

At Solar Topps, we prefer to use microinverters, and particularly those from our long-time partner: Enphase. They are at the forefront of this technology and represent a great solar brand that we believe will be around for a long time. They have spent and continue to spend countless hours testing and improving their products and solutions. We couldn’t be happier with this choice.

Inverters are there to help you convert the electricity harvested from your panels into electricity for your home. If your inverters are not able to keep up with either sunlight absorption or your need for power, then you could be in trouble. There are three types of inverters: string, power optimizers, and microinverters. String inverters save you money and are practical but have higher hazards and are only as strong as their weakest link. Power optimizers do provide slightly better performance than string inverters but are still subject to string-level vulnerabilities. Solar Topps prefers microinverters because of their high quality and their practicality.

Get Real Numbers from a Real Person

Thank you for your submission. Our team will be in touch with you shortly.

Thank you for your interest to partner with us. As a next step, we are redirecting you to our portal for completing the registration process.

Confirmed
Back To Home

By booking this appointment, you agree to Solar Topps Terms and Conditions.

This website uses cookies to improve your experience while you navigate through the website. Out of these, the cookies that are categorized as necessary are stored on your browser as they are essential for the working of basic functionalities of the website. We also use third-party cookies that help us analyze and understand how you use this website. These cookies will be stored in your browser only with your consent. You also have the option to opt-out of these cookies. But opting out of some of these cookies may affect your browsing experience.
Necessary Always Enabled
Necessary cookies are absolutely essential for the website to function properly. These cookies ensure basic functionalities and security features of the website, anonymously.
Functional
Functional cookies help to perform certain functionalities like sharing the content of the website on social media platforms, collect feedbacks, and other third-party features.
Performance
Performance cookies are used to understand and analyze the key performance indexes of the website which helps in delivering a better user experience for the visitors.
Analytics
Analytical cookies are used to understand how visitors interact with the website. These cookies help provide information on metrics the number of visitors, bounce rate, traffic source, etc.
Advertisement
Advertisement cookies are used to provide visitors with relevant ads and marketing campaigns. These cookies track visitors across websites and collect information to provide customized ads.
Others
Other uncategorized cookies are those that are being analyzed and have not been classified into a category as yet.
SAVE & ACCEPT